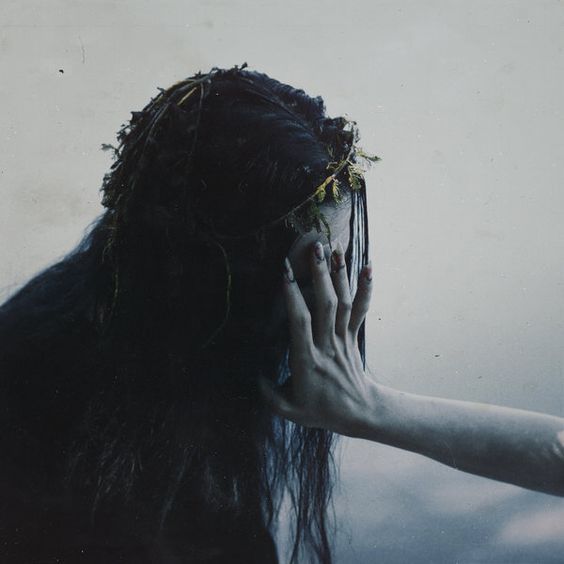 “She wasn't pretty. She was otherworldly and vaguely threatening.”
- Michael Susanoo.

A panic state of suffocation began as the air began to renounce its claim upon the diminutive form whilst the water swallowed her whole; the air began to escape and abandon the being who relied heavily upon it. For she had forsaken her privilege to have oxygen soar through her bloodstream - and darkness was quick to take its rightful place once the hopeful light relinquished its crown.

The waves twirled round the dying figure, curious sea creatures observed from afar as frantic muscles soon gave into realisation; the nameless girl succumbed to the overwhelming brawn of death’s wicked clutches only to soon to find herself eager for its addictive embrace.

(Yet its bitter sweet touch was just as teasing as ever)

Not today, my love. For you shall now feast upon life itself.

Uneven, albeit slow breaths choked upon the salt and confusion set in; plaguing not just the fragile mind but everything it controlled. Uneasy and unsure, a new life crawled into her lungs and bloomed; it’s crooked fingers enclosing around each rib, burgeoning unhealthy habits and monstrous delights. It flourished an ability to breathe in water as if it were air and as it finished reconditioning the outdated mortal lungs, its attention lowered.

Thighs, shins and knee caps gave themselves over, surrendering themselves to the honeyed heat which enriched her; they merged to become one, scales transcending the natural eye and soon enough ----

She was one with the sea.

She frolicked in dancing currents who were delighted with its newest resident. The joyous moment could only last for as long as it began, for the flourishing life within her ribcage trembled to be fed. The life beat against her from the inside, crying to be heard, demanding to be satisfied. It beat her skeleton black and blue, scratching and clawing for attention, refusing to be ignored.

And like an itch in the back of her throat she resurfaced, a song as sweet as nectar dripped from her tongue; a curse so enticing not even the purest of hearts could withstand. The girl cooed, and warbled for what felt like a heavenly embrace for all those who heard; an angel disguised as the Pied Piper who they followed ----

unbeknownst to them, to their ultimate demise.

A line of obedient prey stood upon the shores, bowing to the heaven sent who cradled them with a warm and glorious harmony.  The last droplet of water fell from her, the power resurgence transformed the tail to two legs to stand, and moonlight glistened upon regal and naked flesh; a Queen almighty.

A deadly chill breezed between her servants, manipulated to give her what she so deeply craved. Death loomed and hung heavy in the night as a Banshee’s cry erupted within the shadows of a land far away; animals scurried to find protection within the overindulging woodland at the horizon line between where land and sea begin. They would rather watch the upcoming massacre from afar, the foreshadowing scent of blood sent a shiver down their spine.

A feast was about to begin, and the air paused momentarily as it anticipated with a nervous excitement and soon, the unforgiving sea breathed its encouragement to the neophyte.

(Eat, my dear beast. They bow to you)

Wild talons ripped through the seams, razor like canines escaped through red raw gums as the woman salvated for her dinner. With feline, graceful movements, life was soon effortlessly plucked from her chosen ones; like a wildflower being trampled on by over excited children. A lack of care for life was so artistically presented as nothing but blood coated and thunder cracked bones remained on a sandy battlefield.

The beast fluttered as the ghastly scene charmed her; a wicked curl appeared on pomegranate-red lips. Death lingered upon her taste buds like a divine Amrita, a craving so deeply embedded that light itself could never touch and nor would it want to.

Porcelain skin, shadowed with an ever growing addiction to death stood proud as the sea kissed at her feet.

(Rainore Riverscar it is time to come home to the wild.)

The salt cried for its Empress.

She repeated with clouded confusion.

But the confusion, once settled, allowed a new found curiosity to creep in; and she willingly gave herself to the alluring waves. The sea had much to answer for, and she would take what was hers with destruction and manipulation; a wrath that would shake the seabeds to their core.